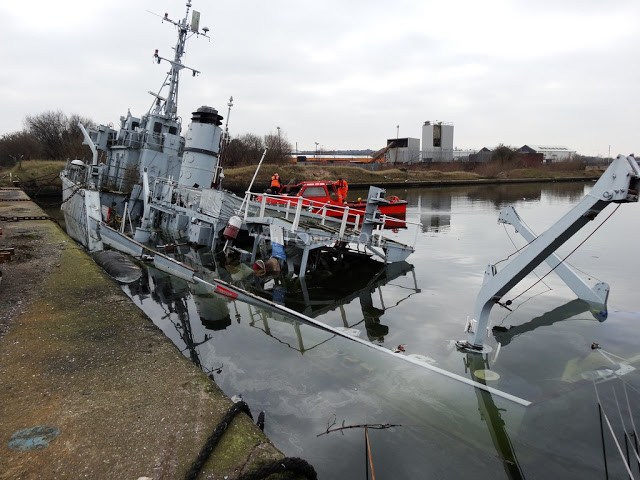 (Reprinted from the Ton Class Association)

BRONINGTON has sunk at her berth in Vittoria Basin, Birkenhead. She was discovered semi-submerged on the morning of Friday 18th March.

Subsequently there has been considerable ill-informed speculation on social media about the cause of the sinking and a further “rescue” attempt. TCA was last on board the ship in 2012/2013 when, with the cooperation of Peel Ports, we recovered several items of her minesweeping equipment. These  are now on public display at Marshland Maritime Museum, Clenchwarton, near Kings Lynn, where owner and TCA member Mike Smith has kindly allowed us to build up a gallery of TON-Class memorabilia.

TON Talk Edition 156 of June 2012 described the parlous state of affairs we found aboard the hulk – for that is what she had been reduced to by vandals and a raid by a consortium of museums that had not consulted TCA about the artefacts we had placed aboard BRONINGTON.  She was beyond economic repair, with everything of value, financial and sentimental, stripped from her, with bridge, cabins and messdecks trashed. At that time we raised serious concerns about her structure and watertight integrity of her hull.

In the early and mid-1980’s senior members of TCA attended meetings where interested parties got together to examine the possibility that a representative TON could be preserved as a museum ship. The discussions encountered many difficulties, not least of which was finance, and the end result was to bring BRONINGTON to Manchester but with funding for only a limited period.

TCA has never had any financial or legal interest in BRONINGTON, but we have strong emotional links with her and visited the ship regularly when she was open to the public in Manchester and Birkenhead. We have endeavoured to maintain working relationships with all parties who have owned/controlled the ship since she was bought out of the RN in 1989.

As well as adding equipment and memorabilia to her inventory, TCA has also worked with BRONINGTON’s owners on maintenance and preservation of the ship, including making grants for materials for repair work.

TCA does not wish to engage in the speculation following the sinking. Instead we have concentrated on our dialogue with Peel Ports, owners of Vittoria basin and, de facto, responsible for BRONINGTON.

Peel Ports have been in discussion with the Environment Agency for some time about appropriate methods for “de-construction of the ship in situ” i.e. breaking her up where she lay. Some time ago we advised Peel Ports on the method and agencies adopted to dispose of KELLINGTON in Stockton on Tees in similar circumstances.

TCA hopes soon to be able to advise, with regret,  that Peel Ports has commenced the scrapping of this iconic vessel.